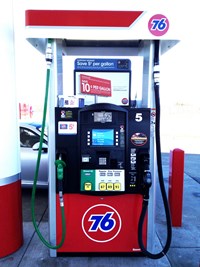 Rinehart Oil, Inc. specializes in the transportation and distribution of motor fuels to service stations, truck stops, commercial business, state and local government, agriculture and private customers.  Our primary focus is on delivering branded retail and wholesale fuels to independent retail service station owners and operators. Our trucking operation is dedicated to transporting motor fuel on a 24 hour 365 day per year basis with emphasis on providing exceptional customer service and on time deliveries on every order. In addition to our distribution and trucking business we own and operate multiple Pacific Pride Commercial Fueling locations and one retail service station and convenience store in Northern California.

Robert F. Rinehart started his career in the oil industry as a retail salesman with Richfield Oil Company in 1953.  He relocated his family to Ukiah, California in 1956 when he accepted a promotion with Richfield to become an area wholesale manager.  In 1959 he purchased the Richfield bulk plant in Ukiah and became a consignee for Richfield.  In 1962 the Richfield warehouse, office and bulk plant burned to the ground in a fire that destroyed the entire facility and business.  Bob ultimately rebuilt the warehouse and office and continued with Richfield until 1964 when he struck a deal to purchase Walter Heady's Wilshire Jobber-ship in Ukiah. In a courageous move he transferred his Richfield customers over to the Wilshire brand and became Rinehart Oil, an independent oil marketer.  Bob continued to operate the business under a number of different brands including Richfield, Wilshire, Gulf, Mohawk, Phillips 66, Mobil, BP, Texaco and 76. The business and location he purchased from Mr. Heady in 1964 is still the corporate headquarters for Rinehart Oil, Inc. today.   Bob retired from Rinehart Oil, Inc. and the oil business in 1997, after a 46-year career.  His son Reed now owns and operates the business Bob Rinehart founded over 50 years ago.

Rinehart Oil strives to be the company customers can depend on for exceptional service, quality products and unparalleled practical knowledge and support.